BBM, who we introduced to our readers earlier, became one of the projects awarded with 1000 euros at the SozialMarie Awards, in Vienna. It's exciting to see that a biker gang killing time with helping homeless people can gather that much awareness, support, and success. Hoo-ah!

But Budapest Bike Mafia is so much more than that. Taking part in the Szimpla Market, cooking and transferring the goods offered by the random buyers of the hip farmer's market to families with many kids is firming BBM's position in the civil underground of Budapest, and shows the vitality of the whole network. 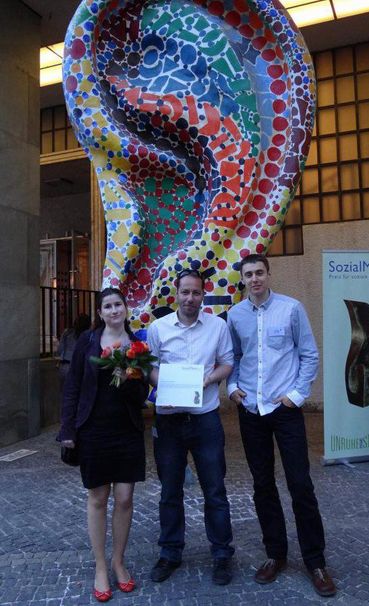 There are another developments from the news about the awards that fuel All Plants Bulletin's enthusiasm:

One is that Romani Platni also came home with an award. RP is about roma women of District 9 cooking for strangers and welcoming them for a traditional roma dinner in a homely environment. We could go on and on about breaking social borders and bringin cultures together, but we spare you from that for now. Romani Platni also visited Szatyor once, cooking from the high quality local ingredients of Szatyor's suppliers - a project that came into being from the humble idea and suggestion of the APB editorial.

And here comes the big stuff: 'Against Fuel Poverty with Biobriquette', another Hungarian project, focusing on helping poor families cut their energy bills with renewable, sustainable solutions won the first prize of this year's SozialMarie, and the 15 000 Euros it comes with - a huge boost for a low-tech enterprise, which we will examine a bit more later on here, on the pages of All Plants Bulletin.

"The objective of SozialMarie is to make innovative social ideas and their realisation known to a broad public. By means of these prizes, Unruhe Private Foundation encourages networking amongst projects. These projects can then serve as examples or models for other interested parties. For the ninth time already, the SozialMarie awards put social innovation before a broad public. About 1700 socially innovative projects have been submitted since the first SozialMarie edition in 2005 and 120 of these have won awards. Every year, outstanding socially innovative projects that strike by their innovative force and creativity compete for the prizes endowed with 42,000 Euro. Eligible for submission are projects from anywhere in Austria, Hungary and the Czech Republic. In Slovakia, Poland, Croatia, Slovenia and Germany for practical reasons projects must not be more than 300km (as the crow flies) away from Vienna." - according to their website.